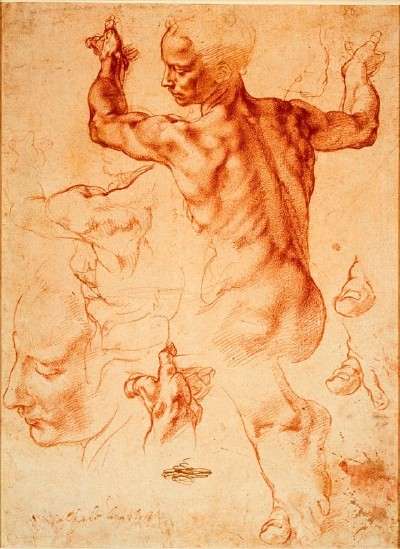 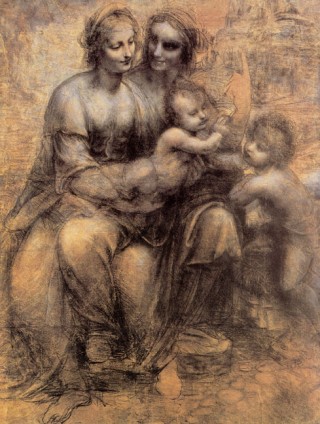 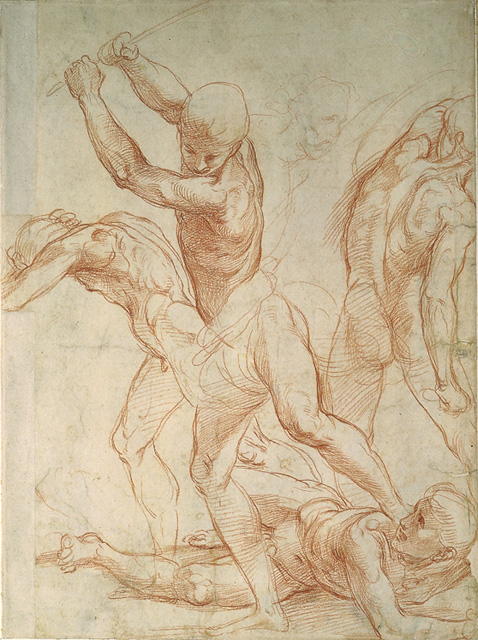 Welcome to my blog. I thought in this first post I would look at three of the greatest draftsmen who ever lived: Michelangelo Buonarroti, Leonardo da Vinci, and Raphael Sanzio.

Throughout this blog I will be exploring drawing, painting and artistic anatomy. I will be posting some of my own drawings from time to time, done both from life and the imagination (a topic I will discuss in a future post). Look for ongoing posts on the basics of drawing and posts devoted to the basics of human anatomy. I will review any art books that I find interesting and we will look at the great artists of the past and the present.

I selected the three drawings above because they are three of my favorites. Although each of the drawings are different, stylistically, all three show a wonderful sense of volume. Each of the artists had an uncanny ability to draw around the form. Michelangelo used very fine hatching which merged into almost solid tone over the right scapula and on the shadow side of the 7th cervical vertebrae.

Leonardo da Vinci used mostly tone to achieve his effects in this drawing through a technique he called sfumato (a blending of tones to achieve a very smooth transition from light to shadow), although he was able employ a lovely, fine line when he chose to. His choice of this technique in this particular drawing may have had something to do with its being a full-size cartoon (54 3/4"x39 3/4").

Raphael Sanzio used a coarser hatching than Michelangelo which flowed around the contours of his forms in certain places, almost like a computer wireframe model.

Achieving a sense of volume in a drawing is critical to its success(as are gesture, proportion, modeling, perspective...). In a truly fine drawing I like to get the feeling that if I were to lean to one side, I could peer around behind the figure occupying the space in front of me.

Remember, even though you are drawing on a two dimensional surface, life is lived in three dimensions. Learn to measure not simply the height and width of your figures, but their depth as well. Draw as the sculptor sculpts; feel the volumes swell and contract beneath your pencil as it caresses the living, breathing form.

“All things are transparent there is nothing dark or resistant, but each form is clear for other right down to its innermost parts, light is clear to light. Indeed each has everything within it and again sees all things in any other, so that all things are everywhere, everything is everything, each individual is all things, and the splendor is without end.” Plotinus on beauty

All passes. Art alone
Enduring stays to us;
The bust outlasts the throne,
The coin, Tiberius.
(Henry Austin Dobson)
Draw as the sculptor sculpts; feel the volumes swell and contract beneath your pencil as it caresses the living, breathing form. (Michael Whynot)
All lines are not created equal; the rhythm of life may be seen in a line, drawn with feeling, by a sensitive hand; whereas a lesser hand draws merely a line.
(Michael Whynot)
Nature should never confine the imagination, but free it.
(Michael Whynot)
A drawing's success is built upon the eye's ability to measure comparatively, one form against another, and the heart's ability not to measure the life out of it.
(Michael Whynot)
The act of drawing well is advanced through the act of understanding form, while the act of understanding form is advanced through the act of drawing well. Understanding and drawing, each dependant upon the other, so intertwined that when I examine them closely they appear, to my eye, as one.
(Michael Whynot)
Drawing must become an obsession - like a private religion, where line is your God.
(Michael Whynot)
Imagination begets creation.
(Michael Whynot)
Life unravels too quickly, too quickly altogether. Art offers us a respite, a chance to breathe and experience the wonder of existence; art is a nightlight shinning at 3:00 in the morning.
(Michael Whynot)
A great work of art is universal, for in it, sitter, artist and viewer each glimpse themselves. (Michael Whynot)
When God created man, I like to imagine that He began by first exploring His concepts for the human form through a series of loose, preliminary drawings before ever committing them to flesh and bone. (Michael Whynot)
The purpose of art was never to copy nature, but to reveal true nature.
(Michael Whynot)
Draw without ceasing; never concede. Draw, even when you can't draw, your mind as your pencil, your memory the paper.
(Michael Whynot)

The Beauty of Forms.

That I am blessed to bear witness

To the beauty of forms

Amid these common aspects of daily life;

But, oh, how it consumes me,

As I struggle to release it,

From the inside out.

Seeing grace is the precursor to drawing grace. So, perhaps, grace must be present in both artist and model. Perhaps grace is what we, as artists, see.
(Michael Whynot)
If the form is not clear in your mind's eye, it will never be clear in the viewer's eye.
(Michael Whynot)
There are so many ways that a drawing can fail, that I am led to contemplate the hand of God in my work - the minor miracle exposed - when I actually succeed.
(Michael Whynot)